An Innovation Too Far? 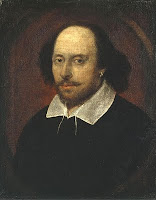 Here’s a question: How much is too much when “tweaking” a classic to give it a new spin?

Quite a number of years ago I bought tickets to a production of one of Shakespeare’s popular comedies. The show had been touted for its all-male cast. Naturally enough I thought it would be a highly traditional, even close to authentic staging, given that female roles in Shakespeare’s time were played by males.

Alas, traditional was it not. The acting might have been good, even excellent. But it was wholly obscured by staging that used metal and transparent plastic sets, and the voices of the actors could scarcely be heard over the din of atonal jazz. These elements, designed no doubt to refresh the classic play, instead rendered it obscure and frankly unbearable.

This past week I attended two productions of classic works at Indiana University. The first was put on by the Theater Department, a rendering of Shakespeare’s As You Like It; the second by the Opera Theater, a new production of Mozart’s Die Zauberflöte (The Magic Flute).

As You Like It was rather delightfully “tweaked,” with casting adaptations that one-upped even Shakespeare’s penchant for gender-bending. But somehow setting the frolicking finale to the Beatles’ classic version of “Twist and Shout” jarred. It was rather like seeing one too many pies in the face — farce ad infinitum. Plus, the speech that followed it was anticlimactic and, while standard, was all the more incongruous after everyone had been twisting and shouting.

If anything, Die Zauberflöte was even zanier: Mozart meets the Muppets. Mozart himself put in a few appearances, red frock coat, powdered wig, and all. Sometimes he materialized in Disneyesque boxes that opened in the scenery. Opera goers of a certain age must have been reminded of the TV show Laugh In or perhaps Hollywood Squares.

Mozart’s opera is juvenile and funny as it is, but apparently for modern audiences the childishness must be more blatant, with puppets reminiscent of Broadway’s The Lion King and an enormous dragon right out of a Chinatown parade. Still, the Queen of the Night’s aria resonated, and Papageno was brightly acted and sung in spite of the enormous puppet birds with their black-clad animators cluttering up the stage.

So, how much is too much? One viewer’s happy innovation well met is another’s over-the-top flop. There are times when I would like to see a play played straight. Fortunately that happens often enough that I can appreciate when Shakespeare’s, Mozart’s, or some other classic writer’s or composer’s work is “tweaked” — even when the tweaking overreaches at times. 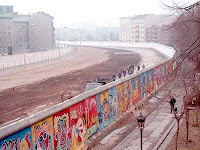 Monday, November 9, 2009, marks the twentieth anniversary of the fall of the Berlin Wall, the physical and symbolic barrier that divided West and East Germany during the post-World War II era. The wall was erected in 1961 and torn down in 1989.

As a youngster, I lived in Germany in the late 1950s before the Wall was built, in the mid-1960s and later in the early 1980s during the Wall period, and have visited Germany a number of times since the Wall came down and Germany has reunified. This long span has given me time to reflect on the Wall from various aspects.

One of the most interesting aspects is the artistic. On the Western side of the Wall, the German people used the concrete ribbon that divided their country as a canvas for graffiti art that protested the grimness of the Wall as much as its geopolitical reality.

Graffiti have existed since ancient times. The Greeks and Romans used this type of street art. Though often considered merely a form of vandalism, graffiti often have served higher purposes, mainly to convey social or political messages, such as protest. Today such art often is associated with urban hip-hop culture and gang “tags” (or logos). But there also have been efforts at commercialization of graffiti, and the artform has been used as an element of community building, especially for disaffected youth.

More than mere street art decoration, on the Berlin Wall graffiti protested the political and social conditions of the postwar period that forced Germany to remain divided long after the thunder of World War II battles had died away.

Fragments of the Wall can now be seen in institutions around the world, including the Museum of World Treasures in Wichita, Kansas, where a section of the Wall has been placed by the American Overseas Schools Historical Society (AOSHS), on which board of directors I happen to serve at the moment.

Posted by Donovan R. Walling at 9:09 AM No comments:

George Clooney is more actor than star, though the latter title is equally apt; he’s been compared to Clark Gable and Cary Grant. Clooney can be suave, sophisticated, serious, intense, and, well, loopy. He seems at ease in all modes, doing whatever it takes to nail a role.

Loopy takes center stage in his latest movie, The Men Who Stare at Goats, directed by Grant Heslov and based on a book by British journalist Jon Ronson. In this thinly plotted, deadpan comedy, Clooney plays a psychological warrior named Lyn Cassidy, who has been trained to kill by staring at the enemy. While the story jars somewhat against the realities of the current war in Iraq, mostly it’s just a romp. New Yorker critic Anthony Lane referenced Road to Morocco, the classic Bob Hope-Bing Crosby buddy flick that was part of a franchise of “Road to” movies made mainly in the 1940s. It’s a worthwhile touchstone. Clooney is supported in the new film by Ewan McGregor, Jeff Bridges, and Kevin Spacey.

Clooney has been able to balance a career that combines work on blockbusters with more commercially risky ventures, several of which reflect Clooney’s liberal social and political activism. Along the way he also has taken to screenwriting, directing, and producing.

From playing Roseanne Barr’s boss in eleven episodes of her sitcom (1988-1991) to winning an Academy Award for Best Supporting Actor for the political thriller Syriana in 2005, Clooney has explored a range of roles and delivered solid performances. Syriana also netted Clooney a Golden Globe Award for Best Supporting Actor to complement his 2000 Golden Globe Award for Best Actor for the satiric O Brother, Where Art Thou? Like his goat-staring Cassidy, his Ulysses Everett McGill in O Brother is loopy — and hyper — in this popular film loosely based on Homer’s Odyssey.

My personal preference is his comedies, including those above and films such as Leatherheads. Then there are the adventure flicks that combine sleek sophistication with tension and action, including Batman & Robin, Oceans Eleven (Twelve and Thirteen), and the black comedy Burn After Reading. The serious dramas, such as Michael Clayton and Good Night, and Good Luck also vie for attention. With George Clooney, the question that always hovers in the air is, what next? Given his track record, it’s likely to be something interesting.

Posted by Donovan R. Walling at 8:41 AM No comments: 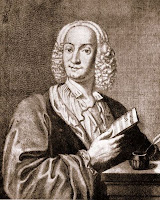 This afternoon the choir of First United Church here in Bloomington, Indiana, presented a special concert, titled “Viva Vivaldi!” Accompanied by a chamber orchestra, the choir sang Vivaldi’s “Gloria” and “Magnificat,” The “Gloria” is Vivaldi’s most familiar piece of sacred music.

Antonio Vivaldi (1678-1741), a Venetian priest and violin virtuoso, was a popular baroque composer. He is probably best known for a series of four violin concerti, “The Four Seasons.” Decades ago (I don’t remember precisely when) I adopted “The Four Seasons” as my traveling music. Whenever our family or I alone embarked on a long car trip, we took up the tradition of inserting an audio tape of the concerti into the car stereo and set off to the magnificent strains of Vivaldi’s violin masterpiece.

My late wife was the musical one, as is my current partner; I’ll lay claim to some better knowledge of the other arts. But my musical sensibilities, though broad, are not deep. Nonetheless, even I could discern that “The Four Seasons” as performed on our original audio tape sounded “muddy.” I have mercifully forgotten the artists. In any case, my wife subsequently surprised me with a recording on which violin virtuoso Itzhak Perlman (whom I would later see in performance) played. The difference was astonishing! Such crispness, such liveliness — it was a world apart. It is the Perlman tape that I still play today whenever I set out on a long car trip, though I should soon replace it with a CD or simply download it to an iPod.

I cannot claim that “Viva Vivaldi!” today was as thrilling as Itzhak Perlman’s concert at the Indiana University Auditorium a few years ago. But it was a sumptuous feast for the ears and a fine way to cap All Saints Day, despite the small audience. Those who missed it should be envious.

Posted by Donovan R. Walling at 8:46 PM No comments: