You must, of course, imagine the music. Perhaps ruffles and flourishes to precede the actors: the statesmen, or “the lovers, liars and clowns!” as the opening chorus from A Funny Thing Happened on the Way to the Forum put it.

Indeed, hand-wringing, wrist-to-forehead angst over gays in the military has been one of the longest running shows in Washington—a tragicomedy of epic proportions—ever since Don’t Ask, Don’t Tell (DADT) was passed seventeen years ago. Ultimately, the stars in the cast most recently are the Republican senators who crossed party lines to do the right thing—for a change, literally. Senators Collins, Murkowski, Kirk, Brown, Snowe, Voinovich, and reluctantly Ensign and Burr are the glitterati of the moment.

Obama has proven to be a disappointment in the role of President. Unlike Truman, who integrated the military by Executive Order 9981 in 1948, thus summarily ending decades of racial segregation and second-class soldiering by African Americans, Obama chose to push for congressional repeal to end decades of anti-gay discrimination that stretch back in time long before Congress enshrined it in law with DADT. But, then, Obama’s been playing Stepin Fetchit to the Republicans for two years, a bit part when he should have been playing the lead.

The real stars of DADT haven't seen much limelight. They are the men and women who “told” and so got quietly robbed of their service careers, and the nation has been the poorer for the all-too-easy dismissal of their talents and dedication for nearly two decades.

Finale: Ta-da! Like magicians collectively whipping open the cabinet (or closet) door, Congress—applause, cheers, whistles!—at last has decided to allow gay men and lesbians to serve their country—as they always have, often with honor and distinction—now openly, without congressionally mandated lying about who they are and who they might or might not love or at least have sex with.

Posted by Donovan R. Walling at 7:28 PM No comments:

The Art of Being: A Memory 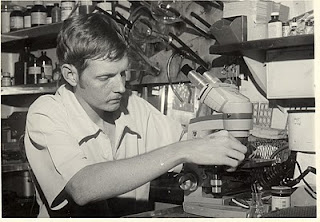 In 2010, when the entire world seems to be represented virtually on the Internet, one would think that everything and everyone can be googled. Occasionally I google my name, partly as ego affirmation, partly to find out where my work is available or has been reviewed. Because I write, I turn up on several pages and literally hundreds of sites. Doesn’t everyone?

On Sunday, December 12, my brother, Michael Allen Walling, succumbed to pancreatic cancer at the age of 56. He’d been a good kid brother; a good big brother to our sister, Carolyn; a good husband. He’d served in the Navy and gone on to a useful post-military career. (The photo inset shows him in his lab aboard the USS Enterprise aircraft carrier in 1976-77.) So out of curiosity I googled his name.

Not a single hit.

I suppose at some point there might be an obituary that google could find. But that seems such paltry recognition for a life well lived.

Many people—famous, infamous, ordinary—can be googled. Not finding my brother on the Internet, however, reminded me that far more people practice the sometimes not-so-simple art of simply being. They live on, then, not virtually in the electronic ether, but in the memories of those they loved and by whom they were loved.

Posted by Donovan R. Walling at 1:26 PM No comments: