Inspiration and the Iconic 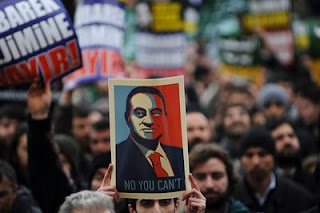 During the 2008 U.S. presidential campaign, an image of Barack Obama designed by artist Shepard Fairey claimed almost as much attention as the candidate. In the image, a stylized graphic in shades of red, blue, and white, Obama gazes upward. Often, riding just below the knot of his necktie, a word was included: progress, change, hope, etc.

The Obama image became instantly iconic, though it flowed from a long-established Social Realism heritage. After the election the National Portrait Gallery acquired a mixed media stenciled version. Permutations of the image using other prominent figures from the political and entertainment fields proliferated. Some were outright parodies, for example, with Obama’s “hope” replaced with “hype,” or the faces of Obama’s opponents Sarah Palin and John McCain with “nope.”

The image sparked a controversy when the Associated Press claimed that Fairey’s inspiration was taken too literally from a copyrighted photograph snapped in 2006 by freelance photographer Mannie Garcia. Fairey sued for a declaratory judgment that his adaptation of the original image was fair use. The legal issues eventually were settled out of court.

In the political realm the iconic elements continue to be used. Witness most recently the anti-Mubarak poster (at right, posted on Facebook by my friend Alex Goebel, a German public radio correspondent stationed in Morocco), which is being carried during a protest to end the 30-year rule of President Hosni Mubarak in Egypt.

Fairey’s powerful graphic embodies the essence of any icon, a bold simplicity that renders the message instantly comprehensible. And so the form can be transmuted, whether for serious or humorous intent, without diminishing its power to communicate.

Inspiration in terms of political art arises from the artist being particularly attuned, often subconsciously, to signals and currents in the culture that shape and are shaped by a political dynamic. Translation of that inspiration into imagery, in the case of Fairey’s Obama portrait, can produce the iconic, which then takes on a life of its own. 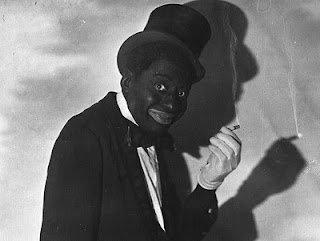 A wintry day recently gave me time to rummage in my collection of old-time radio shows, and my hand came upon a vintage episode of Amos and Andy. The program, a sitcom set in the black community, has been a source of controversy almost since it was created, written, and voiced by Freeman Gosden and Charles Correll, two white men, in 1928. The show was wildly popular on radio in the 1930s and was influential on programs that followed it. It even transitioned to television in the 1950s, although with black actors (who were instructed to sound as much like Gosden and Correll as possible). The last radio episode aired on November 25, 1960.

In the context of an era when racial segregation was the norm, the show was accepted and acclaimed; though even in those days it was not without controversy. A protest was launched in 1930 in an article by the preacher of the African Methodist Episcopal Zion Church, who claimed that the program singled out lower-class characters. This theme was picked up by the Pittsburgh Courier, then the nation’s second largest African American newspaper, but the NAACP declined to join the protest.

Much of the sustained controversy at the root of context versus correctness stems from white actors portraying other races, which was common into the second half of the 20th century. For example, in the popular series of Charlie Chan movies, the Chinese American detective of Earl Derr Biggers’ novels was played primarily by two white actors, Warner Oland and Sidney Toler, in the 1930s and 1940s. Almost to the present day a number of white actors have portrayed Asian characters, including Alec Guiness, Jennifer Jones, Boris Karloff, John Wayne, Mickey Rooney, and David Carradine to name only a few. Linda Hunt won an Oscar for playing Billy Kwan in the 1982 film, The Year of Living Dangerously.

Yellowface, as non-Asians playing Asian was called, survived the political correctness test longer than blackface, although even that persisted until the civil rights era of the 1960s. Witness the 1965 film of Shakespeare’s Othello, which starred Laurence Olivier in blackface in the title role. (On the other hand, Dooley Wilson, who came to prominence as Sam, the piano player in Casablanca, earned his stage name, “Dooley,” playing in whiteface as an Irishman.)

We should not feel behooved to look down on portrayals that fit the context of their time but now, in retrospect, are viewed as politically incorrect. Acting is, after all, an art of artifice, of making things seem other than they are in reality. We do well to remember that in their earliest performances, Shakespeare’s memorable female characters, from Queen Gertrude and Lady Macbeth to Ophelia, Juliet, and Desdemona were all portrayed by males because women were not allowed to perform onstage during the Elizabethan era. Women also were banned from the stage in Japan during the Edo period.

Times simply change—and with them our notions of race, gender, and a lot of other things.

(Photo: Bert Williams, the only black member of the Ziegfeld Follies when he joined them in 1910, is shown here, ironically in blackface. He was the highest-paid African American entertainer of his day.)

Posted by Donovan R. Walling at 7:34 AM No comments: 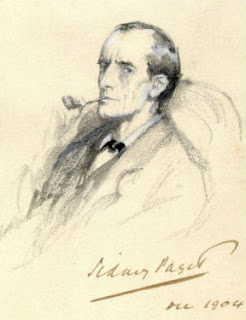 Graham Moore’s The Sherlockian juxtaposes a modern-day mystery to be solved by an earnest young Sherlockian, Harold White, who has just been inducted into the premier Sherlockian society, the Baker Street Irregulars, and a period mystery in which the sleuth is none other than Arthur Conan Doyle, ably assisted by Bram Stoker, who found fame with Dracula. Holmes himself does not appear in The Sherlockian, but the book is a testament to our enduring, collective romance with the great detective. The existence of Sherlockian societies is a similar testament. Indeed, I briefly belonged to such a group many years ago when I lived in Wisconsin. We met in a cozy tavern appropriately called Sherlock’s Home.

Our long-term fascination with Conan Doyles’ creation puzzled even the author himself, who tried to kill Holmes off at the Reichenbach Falls only to feel compelled to bring him back to life for a further series of adventures after what came to be known as the Great Hiatus. Certainly more than the stories must be credited for such longevity, for there is something utterly captivating in the brilliant, maddeningly eccentric personality of Sherlock Holmes.

Another recent addition to the genre is a new British television series, Sherlock (shown on PBS), in which the dashing, improbably named actor Benedict Cumberbatch portrays a Holmes for the 21st century. Cumberbatch’s detective captures all of the nuanced neuroticism so ably conveyed from 1984 to 1994 by Jeremy Brett. For many, Brett was the definitive Holmes. His interpretation was the most compelling of the second half of the 20th century, and he might have filmed the entire Holmes canon had he lived long enough. In the new Sherlock, Martin Freeman is quite believable as a serious, conflicted Dr. Watson.

Bringing Holmes into a contemporary era is a neat twist but nothing new. Another well-remembered Holmes and Watson duo, Basil Rathbone and Nigel Bruce, played not only the period mysteries but in a few set against the backdrop of World War II.

To be sure, Cumberbatch and Freeman are a more interesting pairing than the latest Hollywood big-budget foray into the canon, starring Robert Downey, Jr., and Jude Law as Holmes and Watson respectively. Their 2009 Sherlock Holmes seems more focused on special effects than telling a good story. Nonetheless, a sequel is said to be in the making.

There will be more of the Cumberbatch Holmes stories, too, thankfully. And doubtless someone at this moment is crafting yet another book somehow related to Holmes, this icon of the detection genre. With all of this enduring interest, we should be assured of many fine tales yet to come.

(The Sherlock Holmes illustration is by artist Sidney Paget, drawn in 1904.)

Posted by Donovan R. Walling at 1:46 PM No comments: