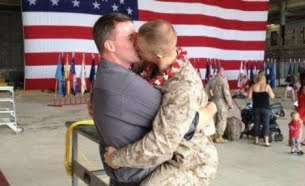 Back to Sendak’s In the Night Kitchen: Child nudity—a state of undress many toddlers prefer, often to the dismay of their parents—is salacious only in a mind driven by perversity. However, in the topsy-turvy view of social-religious conservatism there is no such thing as innocence, except when claimed by those already patently guilty.

Larry Craig, who was caught literally with his pants down engaging in overtly gay sexual behavior, stridently claimed not to be gay. In his own mind, he might not label himself “gay,” but that seems to be splitting hairs.

It has become a cliché that the most vociferous anti-gay politicians and pundits will, at some point, be revealed to be deeply closeted, self-loathingly gay. And those who beat the drum of “family values” most loudly seem invariably to be sleeping around or hiring prostitutes.

Many people in the United States, certainly not only conservatives, are deeply afraid of sex and sexuality. Conservatism merely captures this fear (and others) and raises it to a political art form. As Mrs. Reagan was promoting “Just Say No” to sex and drugs, her husband President Reagan was busy ignoring the AIDS crisis—for six years. (AIDS was first reported in the press in 1981; Reagan didn’t use the word until 1987.) Recently Texas Governor Rick Perry was stumped when trying to defend the state’s just-say-no abstinence sex “education” program in the face of the state’s rank as third-highest in teen pregnancies.

Secrecy, silence, fear, and denial. This is “good” and “proper”—and pervasive—in conservative speak. It’s topsy-turvy language, just the way that Pro-Life is code for anti-abortion (though scratch a pro-lifer and you’ll probably also find a supporter of the death penalty, which would be Pro-Death, wouldn’t it?). And, of course, Pro-Choice equates, in topsy-turvy speak, to pro-abortion. In fact, most Pro-Choice proponents are anti-abortion; they just want women to be able to make their own choices about their bodies.

Because social-religious conservatives are fearful about their own sexuality and so often, it seems, desperate to keep their unacknowledged proclivities secret, they espouse a philosophy that everyone should toe the same imaginary line. Thus when their political power is in the ascendency, we get all sorts of repressive laws regarding sex, sexual expression, and sexuality. Don’t Ask, Don’t Tell, which punished military personnel if they were open about their homosexuality, is one example.

DADT was put into law in 1993, and it took nearly twenty years to overturn it in 2011. The conservative military brass hemmed and hawed, delaying the law’s demise as long as possible until it became all too obvious that claims of allowing openly gay service members would undermine the military were ill founded. Fear and hiding were, at last, trumped by openness and rationality.

A naked little boy in a children’s illustrated fantasy harms no one. Indeed, it does the opposite. It demonstrates that the innocence of childhood still exists, that nudity does not equate to sexuality or perversion, and that occasionally being naked is not a big deal.

What parent of a toddler hasn’t at some point turned around to find that the child has magically shed all of his or her clothes and is running around buck-naked? That’s not an occasion for scandal. It should provoke a smile or a giggle—and a resigned chase to get the kid back in some pants.

Making “innocence” into “perversion” is topsy-turvy language. Such nonsense is both silly and dangerous.

(Photo: The image above of a gay Marine jumping into the arms and kissing his boyfriend on returning home went viral on Facebook earlier this year.) 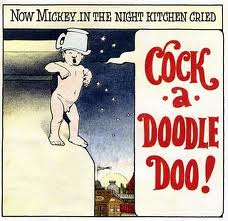 The other day I was reading the free local arts magazine and came upon an article about a local parent challenging one of the public elementary schools over having Maurice Sendak’s In the Night Kitchen in their library. This children’s book by the well-known and award-winning author-illustrator was published in 1970 and won the prestigious Caldecott Honor in 1971.

The book has been challenged by social-religious conservatives since its publication, most often on the basis of the illustrations, some of which depict the central character, Mickey (right), a boy about three or four years old, naked—and anatomically correct. In the course of the story, Mickey dreams that he hears a noise below him, on the first floor of the house. He floats out of bed and down to the “night kitchen,” losing his bedclothes in the process. The bakers in the kitchen, who all look like Oliver Hardy, need milk for the “morning cake,” and Mickey resolves to get some for them. He finds a giant milk bottle, which he falls into but eventually delivers to the bakers. Then he crows like a rooster, slides down the bottle, and is magically returned to his bed. This is a perfectly innocent dream story, right?

However, conservatives’ prurient interests apparently are aroused by children’s nudity, which is hardly surprising but awfully silly. In other cultures, young children can routinely be seen unclothed in parks and on public beaches. It’s normal and natural. But not in the United States, where perversion apparently lurks everywhere—and is nowhere more prevalent than in the conservative mind. This is the same mindset that produced the failed “Just Say No” philosophy in place of actual sex education.

Again, this is not surprising considering the number of prominent sex scandals in which conservatives have been involved. In the topsy-turvy, Alice-in-Wonderland world of conservatism, where words often mean the opposite of their true meaning (Fox’s “fair and balanced” being neither, of course), sex is hidden, desire is denied, and everyone pretends to saintliness, even after they’re caught with their pants around their ankles. Let’s look at a few examples:

In 2002 the darling of 9/11, New York Mayor Rudi Giuliani, made headlines with his mistress Judith Nathan (to the consternation of his wife) and carried on quite openly, even providing Nathan with a city car and a police driver to act as her chauffeur.

In 2004 Republican Jack Ryan dropped out of the Illinois senate race (against Barack Obama) because his wife complained openly that he took her to sex clubs and made her have sex with other patrons.

In 2007 Republican Larry Craig, the gay marriage opponent who had famously called President Bill Clinton “a naughty boy” over Clinton’s tryst with Monica Lewinsky, was arrested for lewd conduct with another man in a Minneapolis airport restroom.

Well, the list does go on and on, but the implications are clear. When you’ve set your own hair on fire as many times as conservatives have, it’s hard to see a whiff of smoke without envisioning a blazing inferno—indeed, the fires of Hell.

So, of course, innocence never is innocent. Topsy-turvy. More in Part 2.

Posted by Donovan R. Walling at 6:41 PM No comments: 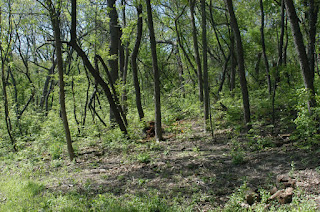 A walk in the woods yesterday prompted me to craft a poem, something I rarely do nowadays. In younger days I wrote more poems, before work and life seemed to get too busy for inspiration to squeeze in. Then, like any trade unpracticed, both skill and impetus simply diminished. But now and then I try to recapture the practice and set down an image or an idea. This was one of those moments.

What passed for winter could not resist

The wooded warmth today as I walked

Uphill and then across the ridge as though

It was already spring and not early March.

To branches, fluttering in the winsome wind

Haze, the buds soon to be seen as distant mist.

On the tamped mud path I trod alone, almost,

Passed once by a man and his dog, and then

In time to the ratatatat of slender trunks

Geese on the lake below hawked the sunlight

That thrilled the deep blue water, their voices

Clear as street vendors in old times, the age

When the oldest trees were saplings, older

Even than I am, now renewed by these woods

Posted by Donovan R. Walling at 8:14 AM No comments: 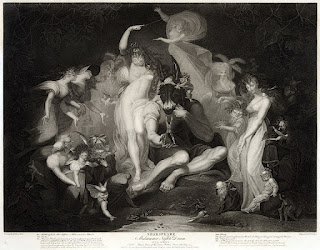 Two performances this past week called vividly to mind the perpetual theatrical theme of scandalous behavior. People behaving in ways contrary to accepted norms of society—usually in a sexual context—is a staple plot device of both comedy and tragedy. This week it was comedy, with scandalous behavior in the enchanted woods in Midsummer Night’s Dream and scandalous behavior among the aristocracy in Der Rosenkavalier.

The Indiana University production of Shakespeare’s enduring comedy, Midsummer Night’s Dream, was set in a 1934 Hollywood movie studio. Oberon, the king of the fairies, swung in on a grapevine with a finer set of chiseled abs than Johnny Weissmuller could ever boast of. One couldn’t help being disappointed when he later appeared fully clothed. Three sets of lovers—intermingling while enchanted—essentially behave both badly and scandalously (a fine distinction): Oberon and his queen Titania (whom Oberon enchants and causes to fall in love with an ass), Hermia and Demetrius (whom Hermia does not love, to the consternation of her father Egeus), and Lysander and Helena (who are thrown together mistakenly by Oberon’s jester Puck).

It’s a confusing plot, of course, following the standard devices of disguises, enchantments, and mistaken identities, all familiar in Shakespearean comedies. Ultimately, it all boils down to love and sex, generally of a scandalous nature. In the end Lysander and Hermia unite, true love winning out. Demetrius claims Helena as a newly rediscovered true love, and Oberon reunites happily with his queen, Titania. All’s well that ends well—but that’s another play.

Der Rosenkavalier, by Richard Strauss, was a highlight of the Indiana University opera season. Those unfamiliar with the opera might well have wondered at two women in bed at the opening curtain. One woman, however, is a man—well, a boy. The role of Octavian traditionally is played by a mezzo soprano, which even though Octavian is supposed to be seventeen is a stretch. But Strauss was inordinately fond of sopranos, and so he managed to populate this opera with several.

An openly lesbian plot would have been too avant garde in 1911, when the opera premiered in Dresden. (A little girl-on-girl apparently went down well.) Opening with the much older (and of course married) Marschallin, Princess Marie Thérèse, cavorting in bed with her seventeen-year-old lover was scandalous behavior enough. There’s bad behavior, though scandalous as well, from the lecherous Baron Ochs, who schemes to marry the nubile, and much younger, Sophie. The Baron avers that scandalous behavior is what sets an aristocrat apart from the common herd.

When the lovestruck Octavian is reluctantly set free by the Marschallin, with the comment that he’ll turn to someone younger sooner or later, he promptly does. With Sophie and Octavian it’s love at first sight. A good deal of comedic mischief follows, involving Octavian disguised as a servant girl—a girl playing a boy playing a girl, shades of Victor Victoria! Octavian’s servant girl persona, “Mariandell,” entices Ochs to an illicit rendezvous, where the Baron is exposed as the rogue he is. With the Marschallin’s blessing, and Sophie’s father’s, Octavian and Sophie are united in the end.

Ah, scandalous behavior! It’s almost as good on stage as it is in the newspapers.